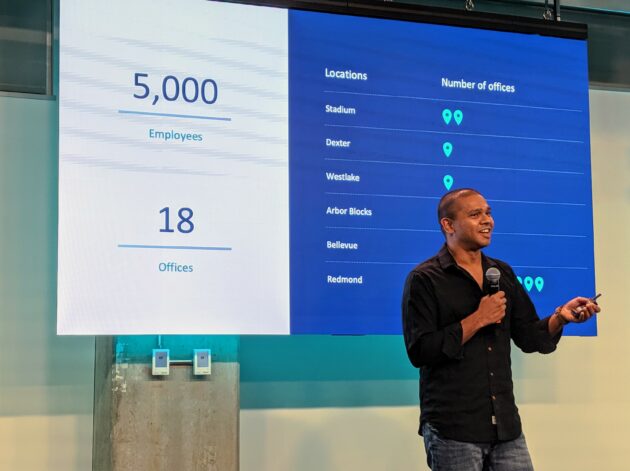 Facebook’s footprint in the Seattle area continues to grow as the social media giant now employs more than 5,000 people across the region.

“This kind of growth is a reflection of our commitment to being in this city and the region and our investment in the community that we’re making, not only in the local neighborhood but also in the engineering talent in the area,” Raji said.

Outside of its own HQ at Menlo Park, Calif., Facebook’s next-largest outpost is in Seattle, where it has added about 2,000 employees since 2018. The Seattle office’s areas of focus include ads, analysts, gaming, and groups, Messenger, and others.

“As we grow our footprint, we also have products coming out of Seattle,” Raji said. “This has been growing over the years and I’m happy to share we have over 20 different product areas represented in the Seattle offices.”

The new office at 333 8th Ave N is part of a two-structure complex; the first building, Arbor Blocks 300, opened to employees this past May. There is room for 2,000 employees across the two buildings.

Facebook has 18 offices in total throughout the region. It just inked a lease for Block 24, a 200,000 square-foot building in Bellevue, Wash. at the new Spring District. The company also has a growing campus near Microsoft in Redmond, Wash., for Facebook Reality Labs, its virtual/augmented reality unit.

Facebook has more than 400 job openings in the region. It employs 39,651 people worldwide, up 31 percent from a year ago.

Facebook is one of the top tech employers in the Seattle region, trailing only hometown heavyweights Amazon and Microsoft. Its scale as an out-of-town tech giant is rivaled only by Google, which has nearly 2 million square feet of space.

Google and Facebook were some of the first companies to open engineering centers in the Seattle region, tapping into the area’s technical talent base. Google planted its flag in 2005; Facebook came five years later.

There are now more than 130 companies from around the globe that have set up engineering outposts in and around Seattle.

The quality of Seattle’s tech talent pool is now the best in North America, according to CBRE’s annual Scoring Tech Talent report.

The growth of Google, Amazon, Facebook, and other huge companies in the Seattle area has put significant pressure on the local real estate market. The vacancy rate, the amount of available office space, is down to 8.8 percent in Seattle and 9.6 percent across the region as a whole, according to a recent report from real estate firm JLL.