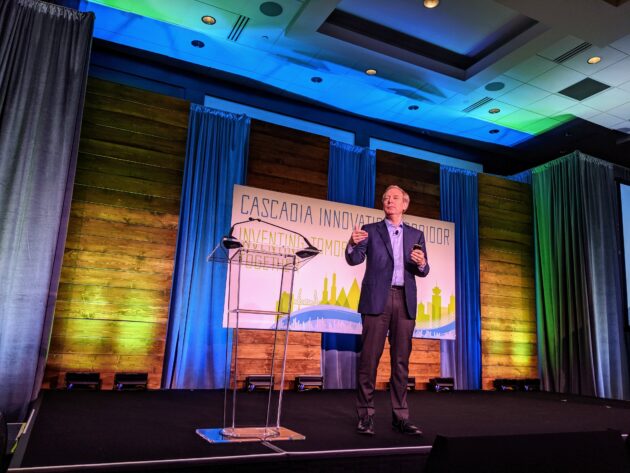 High-speed rail in the Pacific Northwest has long been a dream of Microsoft and the tech giant is accelerating efforts to make that dream a reality.Next month, Microsoft will host government, transportation, and business leaders at the Cascadia Rail Summit, an event in Seattle dedicated to connecting Portland, Seattle, and Vancouver B.C. via a high-speed train. The proposed rail line would make it possible to travel from Seattle to Vancouver in under an hour. Its proponents say that would turn “Cascadia” — named for the mountain range that spans the region — into an innovation hub akin to Silicon Valley.

The Cascadia Rail Summit will take place Nov. 6-8, one month after Microsoft executives and government leaders in the region gathered for the Cascadia Innovation Corridor Conference, another event dedicated to turning the Pacific Northwest into a better-connected tech hub. The idea for a high-speed rail connecting Portland to Vancouver was born out of the inaugural Cascadia Innovation Corridor Conference in 2017.

Three years later, the plan is picking up steam.

Microsoft has donated a total of $573,667 to study the feasibility of establishing a high-speed rail line in the region. The first phases of that study showed that there is consumer demand and market viability for the project.

The Washington State Department of Transportation estimates that a high-speed rail line connecting the three cities would spark between $264 billion to $355 billion in economic growth in the region between 2035-2055. The project will cost approximately $24 billion to $42 billion and would generate between $160 million to $250 million in annual revenue, according to transportation officials.

The Cascadia Rail Summit will “build on those studies, create momentum for the project, and begin the important planning, financing and governance work to bring it to reality,” according to Microsoft and the U.S. High Speed Rail Association, which is co-hosting the event.

“This combined private and public sector support is a major catalyst that could move this project faster to reality and serve as a positive example for the rest of the nation,” said US High Speed Rail Association CEO Andy Kunz in a statement.

The event will be held at Microsoft’s headquarters in Redmond, Wash. It will include speaker sessions, networking, and tours of transit projects in the area.